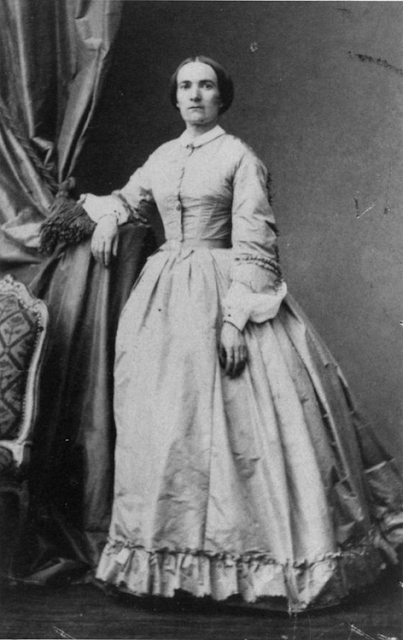 On the great blog Plume d'Histoire, the author has written about the strong-minded woman who was Julie-Victoire Daubié, the first French woman who succesfully passed the Baccalauréat. I love how she brings to life the era and the mindset of her society.

A bit of History:

When Napoléon published the decree, it was not mentionned that women were not allowed. Just people up 16 years of age. As the education of women in letters and sciences were very rare and no middle and high schools were available for them, they didn't have the idea to pass it. As Plume d'Histoire stats in her article, women during the majority of the 19th century were not considered as "humanly equals" to men. Working for 13 hours in a factory, that was acceptable, but learning astronomy, medecine, philosophy, etc, were way too difficult for them... (I'm so sarcastic here... grr)

All that changed with a young woman raised in the Vosges, France. Julie-Victoire Daubié was born on March 26th 1824 and was the eighth child of a modest bourgeoise family. She lived in her paternal grand-father's house and was able to attend primary school -where she received her Brevet Elémentaire (Elementary Certificate).

With the help of her brother - a priest- who taught her Latin, Greek, history, geography and German, she succeeded at the Brevet d’aptitude à l’enseignement primaire supérieur (Certificate of capacity in the upper primary education), the only diploma accessible to women. She became a governess in France and later in Germany. She started to write a book "La femme pauvre au XIXe siècle" (the poor woman in the 19th century)... a book which will become a reality a few years later.

When she wrote an essay on June the 15th of 1859 for the competition opened by the Académie impériale des sciences et belles lettres in Lyon, her life changed. The topic was inspired by François Arlès-Dufour, an industrial businessman:


Look for, especially on a moral point of view, (...) the most practical measures (...) to raise the salary of the women in equality as the men's one when there is equality of service or work; to open to women new career and to procure them jobs that replace those successively taken away by the concurrence of men and the transformation of uses or customs.

Her memoir "The poor woman by a poor woman" won the first prize. Arlès-Dufour became her protector. She decided then to register for the Baccaleuréat (legally nothing could prevent her to register) and was denied the registration by two Académies. The University of Lyon accepted and the 16th of August 1861 she passed her examination. The following day, she became the first bachelière es Lettres.

Legend of the delayed diploma...

Some said that the news of her success was not well received by everyone... What follows is seen as a "legend", but I couldn't leave it out of this post.

Her joy at being a Bachelière turned quickly to bitterness: the minister of Public Instruction, Gustave Rouland, refused to sign her diploma. As Julie-Victoire wanted to attend college for a Licence es Lettres, she needed her Baccalauréat!

François Arlès-Dufour spoke with the empress Eugénie who was a charitable woman and was moved by Julie-Victoire's plea. The same happened with her husband Napoléon III, a progressist and "equalitarian" man who forced Gustave Rouland to sign the diploma in March 1862. Nine month after she passed it, she had her diploma in her hands.

Some historians are dubtious of this story, because the delay between the examination and the diploma being received was between six to ten months during the Second Empire. Even if Julie-Victoire Daubié was not forced to plead with the Emperor, finally, an higher education was possible for the French women!

She was at that time a great example for many women, and even if only 10 women passed with flying colors the Baccalauréat in 1892, new secondary schools had opened for women. In 1920, they were more than one thousand. 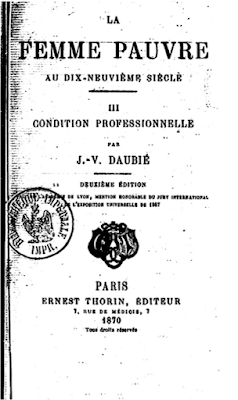 Julie-Victoire had a career as an entrepreneur (she bought an embroidery company), a journalist, a militant and a woman of letters. She had two goals: refute the inferiority of women and permit them to access to equal jobs and salaries.

Between 1866 and 1869, she published her work La femme pauvre du XIXe siècle (=,The poor woman of the 19th century), the fruit of vast researchs. The 28th October 1872 she also became the first woman Licencié es Lettres (without a "e" at the end, as the diploma title was only male at that time), and founded the "Association for the progressive emancipation of woman".

She had several correspondances with illustrious feminists and progressists men and women -Georges Sand, Alexandre Dumas Jr, Josephine Butler, Jules Simon, Léon Richet... She wanted for the French women to engage in economy, politics and vote, something that they were finally allowed to do only in 1944 (and they voted for the first time in 1945) !!!

Deadly sick with tuberculosis in 1874, she didn't have the time to finish her doctoral thesis "The woman condition in the Roman society". She left, at 50 years old, an imprint on the women of her time and others would further carry the hopes and vision of this discreet but persistent woman for more acknowledgement of women's rights.

Woman will become in the society whatever she will be able to be.   Julie-Victoire Daubié.


I passed my Baccalauréat Scientifique in June 2000 and I can't really grasp all the implications her will and her success had concerning the rights and socio-economic situation of women in France. Perhaps another woman would have tried a few years later than her? We don't know for sure... But what I know, is that, because of her, women received the opportunity to study and have better education. They weren't anymore these people that could not think and do something only men were able to...

She wasn't the only woman in the world who stood up for what was right and what women should be allowed to do, but for the French woman I am, the one who feverishly checked the lists of the results and shouted "YES" when I saw my name and my grade for the Baccalauréat examination, she's very important. So, thank you Julie-Victoire. All the French Bachelières should know your name and your story!

Join us for our second annual Women's History Month series, celebrating the contributions and accomplishments of women around the world. Follow along all month plus link up your own posts below! Don't miss our series from last year, and find even more posts on our Women's History board on Pinterest:


March 3
The Art Curator for Kids: Songs We Can See - The Art of Peggy Lipschutz


March 8
Hispanic Mama: 4 Latina Women Who Made It Happen

Colours of Us: 28 Multicultural Picture Books about Inspiring Women & Girls

March 10
Witty Hoots: Some Awesome Women in My Life


March 15
The Jenny Evolution: Non-Fiction Books about Women for Kids


March 16
Discovering the World Through My Son's Eyes


March 25
The Art Curator for Kids on Multicultural Kid Blogs


March 31
For The Love of Spanish