Black History Month is celebrated in several countries. France is not one of those countries, but  I would love for it to do so. Modern and contemporary French History is heavily connected to the rest of the world, especially the African continent. If the French government has "apologized" for crimes that have been done throught History, looking at our past deeds - goods and bads - are still avoided on many topics. Researchers and historians make great work of explaining what happened and how it went. And museums expose their foundings to enable the visitors a better understanding.

I will talk a bit in this post of one point in History that is explained in a museum in Nantes: the Slave Trade in French ports, in the Memorial de l'abolition de l'esclavage - Nantes. 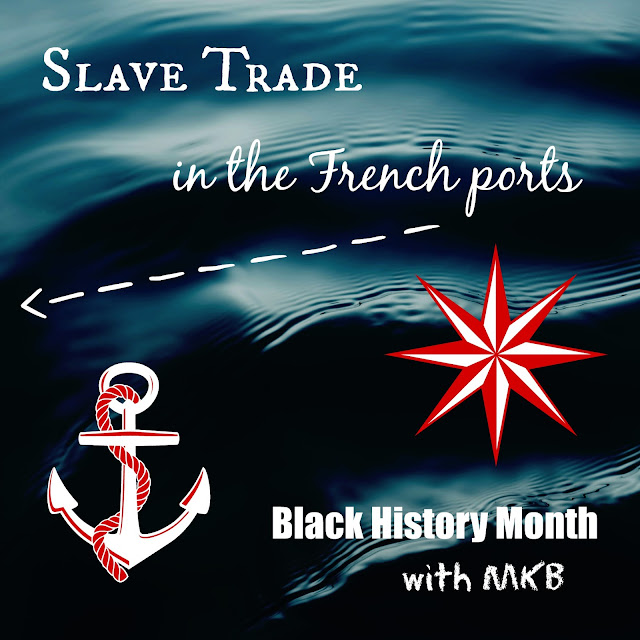 Americas, after the first explorators and conquistadors traveled to these lands, have been seen as properties of European monarchies. Their ressources had to be harvested and as the native population was 1/ not willing to accept ownership and 2/ killed by imported illnesses and violence, new ways had to be found. Moldabled, cheap and "hard-working" people were sent there to help the tenants of the lands. First, it was prisonners or poor people hoping they could gain some richness as indentured servants. Religiously persecuted groups came too, however they were not controlled by the different governements in the same manner as the other "migrants".

Quickly, the new tenants started to use slaves they brought from Africa. If the slave trade knew its peak in the 18th century, Africans have arrived first in 1619 in what will be later the USA. They were then seen as indentured servants and freed after the term of their working contract. At the end of the 17th century, it had changed drasticaly and the Africans were all slaves and property of their owner/master.
In South America and Caraïbean islands the first slaves from Africa came in the 15th century from razzias made by the Spanishs. With the treaty of Tordesillas, Spain lost his "right" to send ships to Africa and had to let Portugal, Dutchland and later Great-Britain and France deal with local slave markets on the West coasts of Africa.

The French, with their colonies in the Caribbean, took part in the slave trade only in the second half of the 17th century, when Louis XIV took the monopole of the tobacco production and forced the colons in the Antilles and Caraibean islands to start the production of the sugar cane. This production needs more workers and so slaves started to be imported. The triangular trade route it induced, opened some new possibilities for the French ports. [see here for more infos in French]

The redaction of the Code Noir in 1685 (a series of decrees) helped the colonies and the traders in their acquisition and management of slaves. The slaves in the French colonies had rights (to marry, to be fed, to not be separated from their family, etc) that many others in spanish and english colonies never had. Many were literate and owned businesses. They had to be educated in the catholic faith, meaning that they were human beings with a soul, something that have been denied in other territories.

17 ports in France participated in the slave trade, with 41,3% for the sole port of Nantes (and it was only between 1707 and 1830). Three other ports - Bordeaux, La Rochelle and Le Havre - made together 33,5% of the ships expeditions. France organized more than 3300 transatlantic slave trade expeditions, with a total of 4220 ships.

During the 18th century ( the big moment in France for slave trade), only 500 families armed around 2800 ships to Africa. These people were not only interested in the slave trade (10 to 33% of the naval long-term trade) but also in the more common trades such as wheat, coton, wine, textiles, salt; fishing ships, insurances... In 1786, 60,8% of the imported products in the port of Nantes was the brown sugar from the Antilles -22 605 000 livres in total!- that came through the triangular trade but mostly from the direct trade. We have this high number an example of why slaves were so important for the colons.


With the benefits they made on the triangular trade, these families invested in industries and manufactures. In Nantes, in 1775, 17 manufactures were listed: textile with the production of indiennes and linen, cords, nails, hats, amidon, bottles of glass, breweries, sugar refinery. The port became also one of the biggest shipyard.


The Memorial in Nantes:

In 2012 was opened in Nantes a Memorial for the abolition of slavery. The past of the city as slave trade port had been "forgotten" for many decennies but in the 90', the historical part of the city was shown in an exhibit and since then, the city has tried its best to research its past. The memorial talks about the abolition of slavery and the city museum (in the castle of the Dukes of Britain) explains what happened in Nantes during 150 years.

A virtual tour is available here. And pedagogic documents can be downloaded for the teachers, in French. I like the list of museums that have exhibits about slavery (old or modern). You can see if you have one near where you live. A pdf document has been translated into English and you can read it here.

The French magazine L'Histoire dedicaced one of their issue to the topic France and its slaves. Some articles in french can be found online.

Today's population in North, Middle and South America are a mix of Native Americans, Europeans colons or migrants, Asian migrants and descendants from African slaves. For many people in this continent, their family history is marred with blood and tears. It is important, essential that historians keep researching about the past of those who came as slaves. Important for those descendants, but also for the countries they live in now, the African countries who have brothers and sisters in Americas and for the world as a whole.

I love History, but what I prefer the most is Love. Those studies, those heart-wrenching discoveries historians and genealogists are founding and showing to the public, this is a work of Love. May we understand better the dark part of the world history to overcome our actual struggles and lead a brighter path, without slavery, deshumanisation, or cruelty.

I have studied History in College. And I like to live by this sentence:
"Know your past to understand your present and forge a better future".

Welcome to our third annual Black History Month series and giveaway! Follow along all month long as we explore the rich history and cultures of Africa and African-Americans. Be sure to enter our giveaway below and link up your own posts at the bottom of the page.
You can also follow our Black History board on Pinterest:

From Candlewick Press: Granddaddy's Turn and Jump Back, Paul US Shipping Only
From Rachel Garlinghouse: Homeschooling Your Young Black Child