The Importance of the Mother Language... told in different languages.

Tomorrow will be International Mother Language Day, an event created in 1999 by the UNESCO and held for the first time on the 21st February 2000. Today a conference is held at UNESCO headquarters. On their website, you can find many informations about their programs to developp education in the local languages and preserve the culture of the people where they live.

I'm quite proud, and at the same time a bit nervous, to be the last one of our group of bloggers who have promoted this event these last 30 days... The topic for today's blog post is "the Importance of Mother Language", and as I live in a city where many different nationalities and ethnies live (Oberursel, near Frankfurt, Germany), I had the idea of asking people (neighbors, friends and fellow bloggers) what they think about their Mother Language.
I asked them two questions: "Why do you love your Mother Language? What is so important for you about it?" As I was a bit busy, I didn't have time to record some people I know speaking Macedonian, Farsi, Turkish, Lingala, Hungarish, Croatian, Japanese and so on...

As I have started to receive the answers, I recognize a patern in them. They all speak about their family and the bond their language has with their heart. What links us to the languages we speak since birth/childhood, is something more profound than just a knowledge, a set up of the mind. It comes from the deepest part of who we are, our "core". This article in the Fountain Magazine, issue of July/August 2010: Mother Tongue: the language of Heart and Mind explains it fairly well.

As a French, having learnt French from birth, I can't phantom a day when I wouldn't be able to express myself in French. Of course, I love to speak / read / write in English (like right now) and I have developped a strong bond to this language, but French (and the culture attached to it) is a part of me so intricatly wooven in my spirit, my soul and my body, that I can't reject it or forget it. All the other languages I'm learning or I will learn, they will add facets to my personnality and my knowledge, but they won't change who I am.

Sometimes, languages ARE LOST... Not only because people stop using them, but also because the population speaking it "died out". The Map of Native American Tribes in their own languages Mr Aaron Carapella is putting together is both a ressource and a reminder that many Native American cultures have disappear. Civilizations can end, but what is worse is that no one remember them or systematicly and willingly "forget" them from historical records.

In a world were communication is "easier" on a wide scale, and a handful of languages is intensively used in this globalization, I am not the only one who wishes for a more multicultural life: multilingualism, understanding of other cultures, preservation of the patrimoine, etc.

With the insights given by the following men and women, may we see the beauty of the human diversity. May we protect and speak, write, share our mother language(s), as much as all the other languages we have learned along our life journey.

The "Russian soul" was quite receptive at my plea, and I have three russian speakers who have shared their love of their language. It seems to me that those speaking Russian since birth enjoy their languages very much, and are proud of the culture around it.

For English speaker since birth, it is both a great gift and a disavantage. When I talk to friends coming from USA or UK, they explain me their struggle. They know how English is "talking over the world", and it makes life easy for them when they have to move overseas. However, the lack of enthusiasm for learning a new culture (language and way of life of other nations) in their youth (and it stills goes on for the teenagers nowadays) has handicaped them for social interactions.

Of course, all English speakers are not monolingual!  I know an educated and amazing woman who speaks English, French, Norwegian, German, and Italian. And she's not keen on stopping learning about the world and its diversity.

Just thinking about my friends who came from English speaking countries in Africa as first generation migrants or second ones... They have learned in their childhood both English and the local language or dialect. And now, they have added one or two more! However, some tend to struggle to keep their African language alive and pass it on their children. The same can be said for Asiastisch and "Tribal languages" of South America... 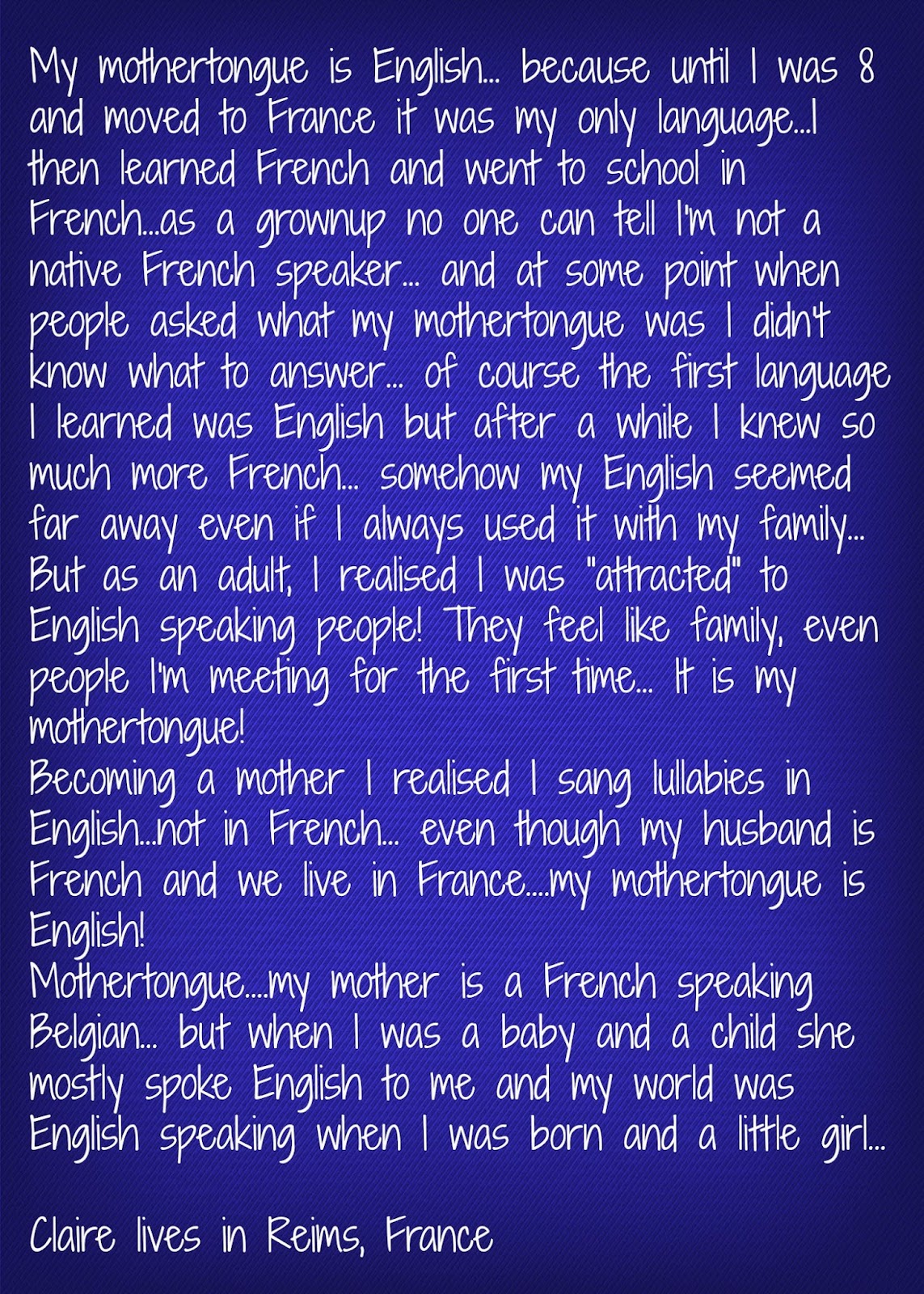 We will have now a travel across the globe, starting with Latvia. 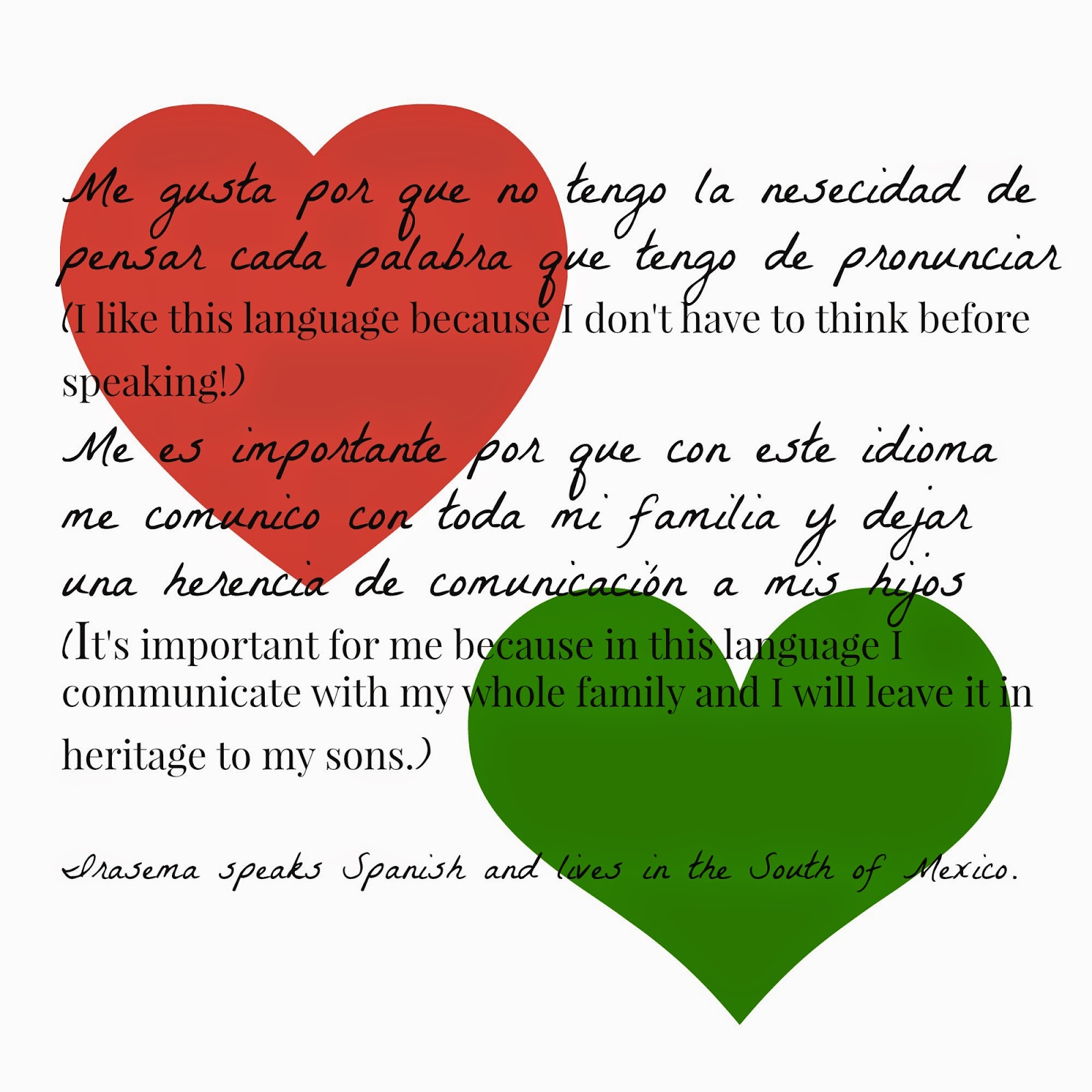 Traveling to Asia, we have Persian: 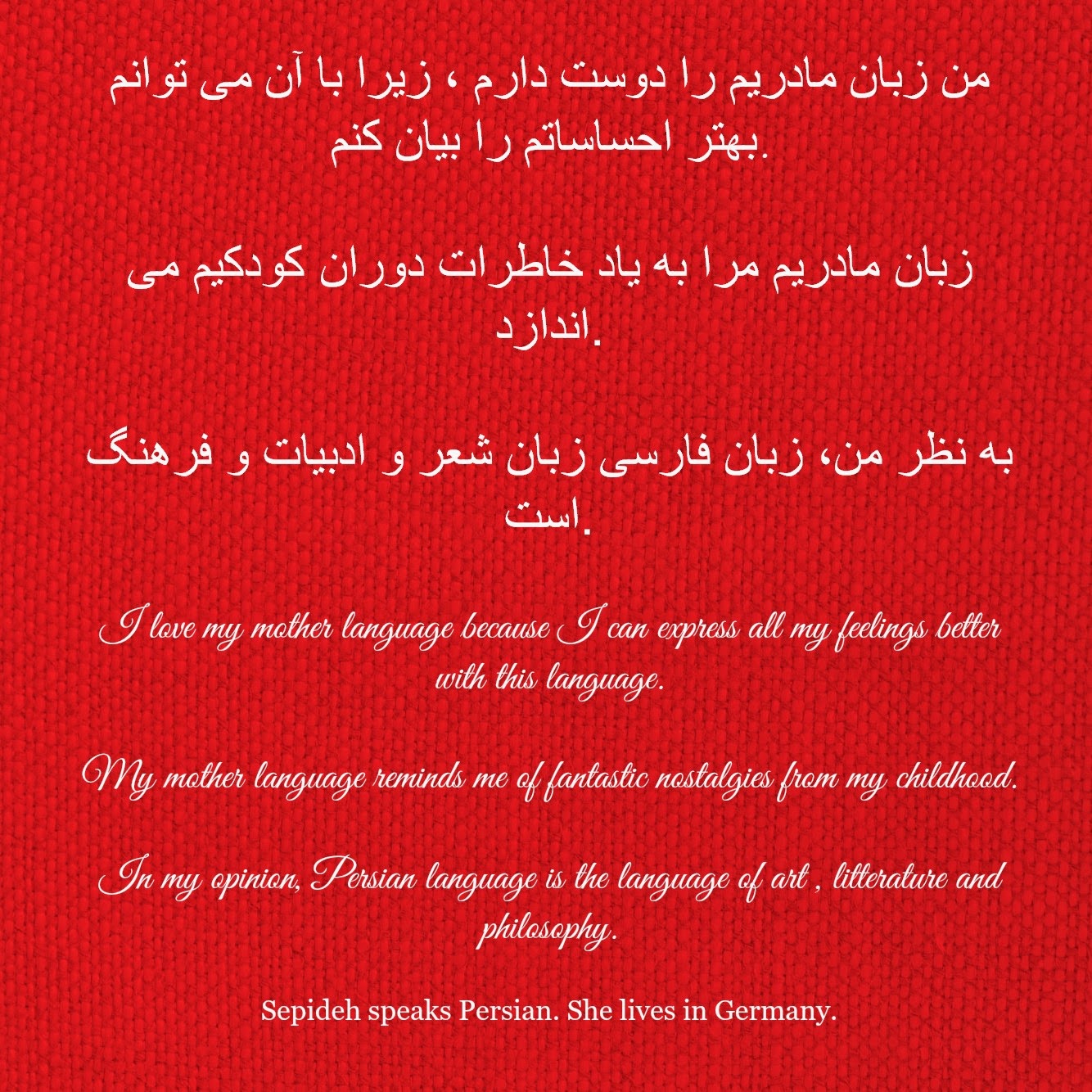 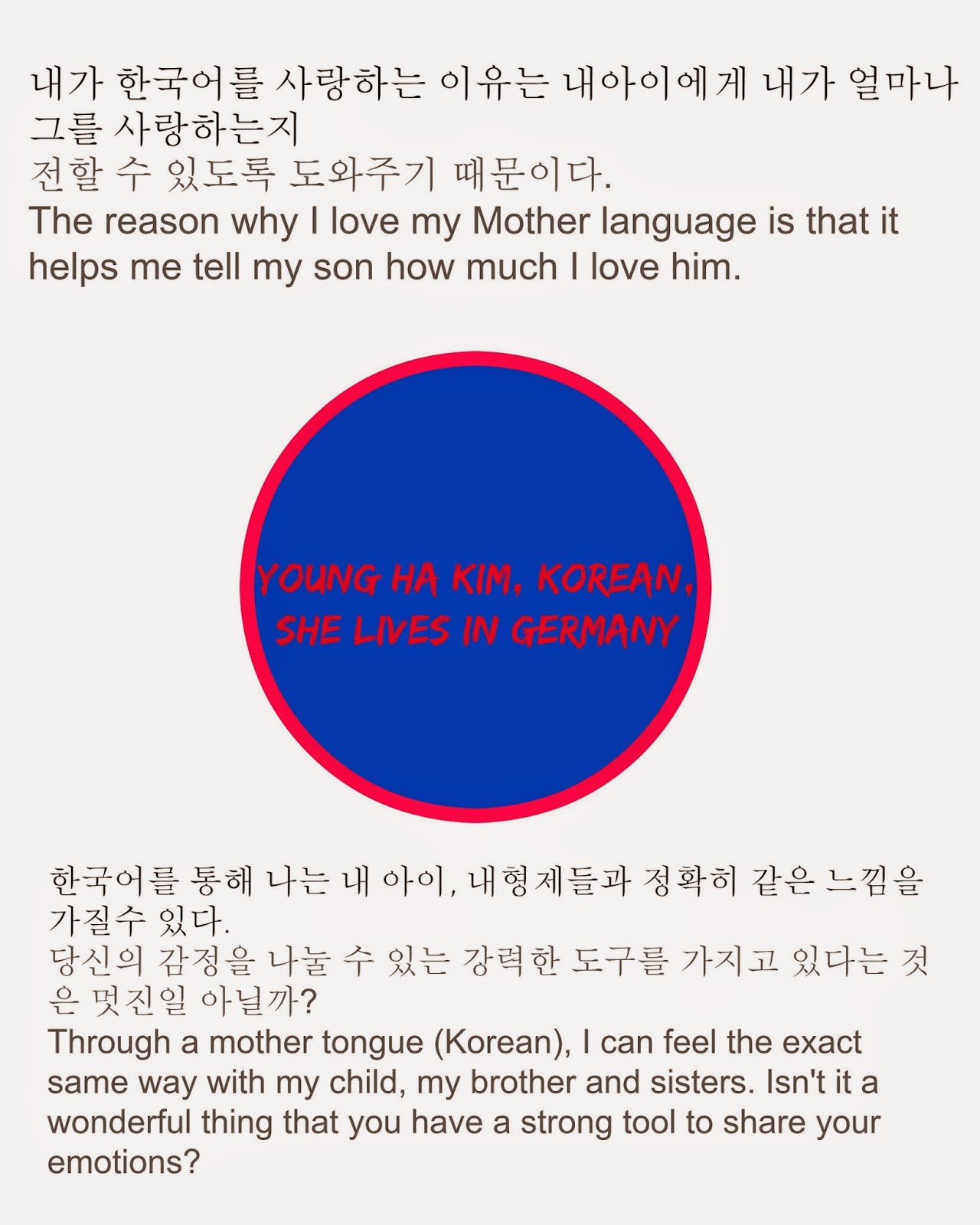 Catalan is a language I have never learned in my youth but I have heard it everyday... I understand it quite well when someone speaks it or when I read a text but can't speak it. I'm sad it's the case because it was my grand-father's language... but as I have never met him (he died when my mom was young), my mother and grand-mother couldn't pass it on to me... 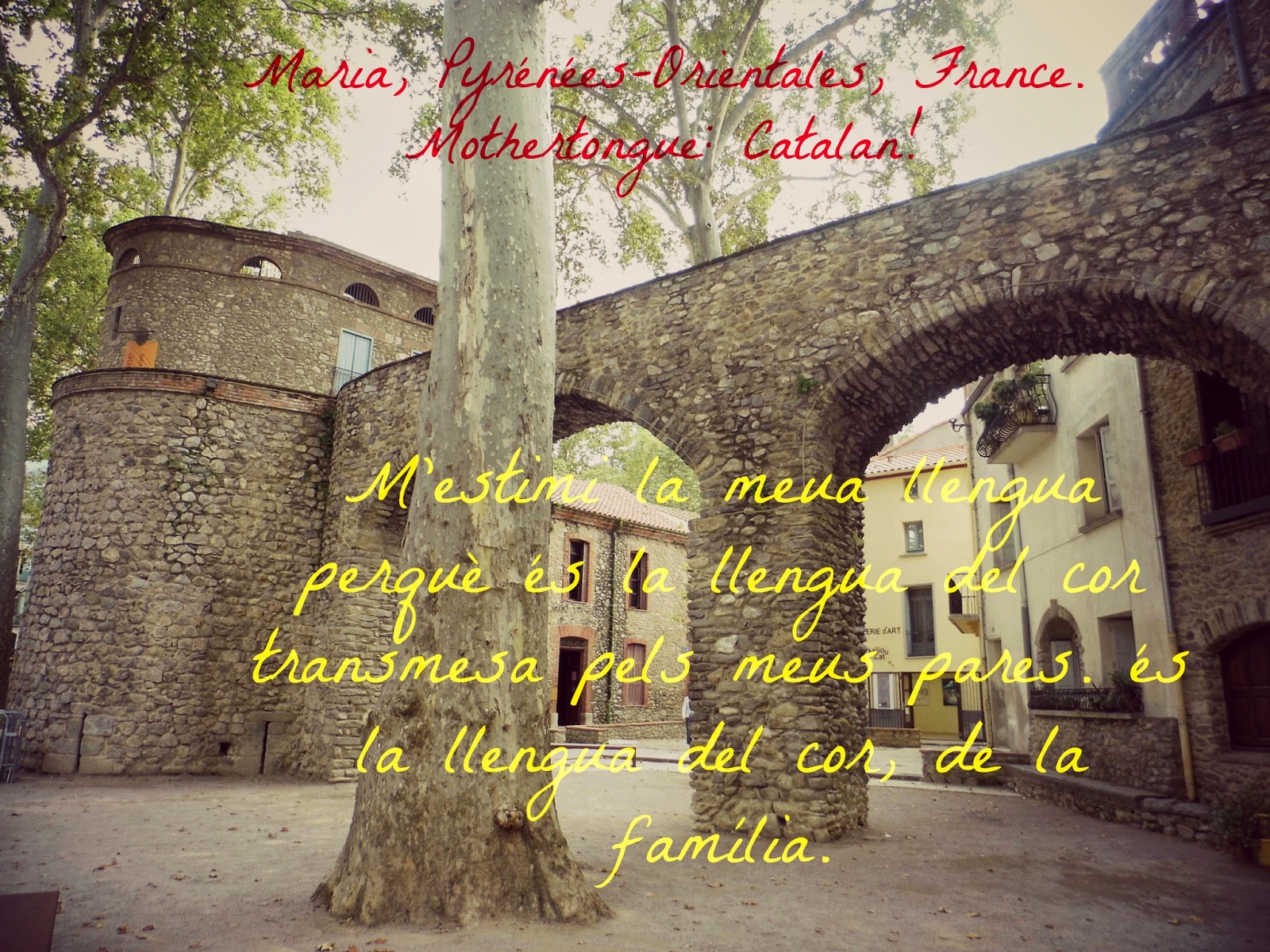 We will have now a beautiful mix of Scandinavian languages, learned as a child by Rita:
Time for the 4th most spoken language in the world: Portuguese. I want to thank Daniela for her meaningful and beautiful answer.


This language is the most spoken as mother language in the world. Can you guess which one is it before scrolling to the end of the picture? 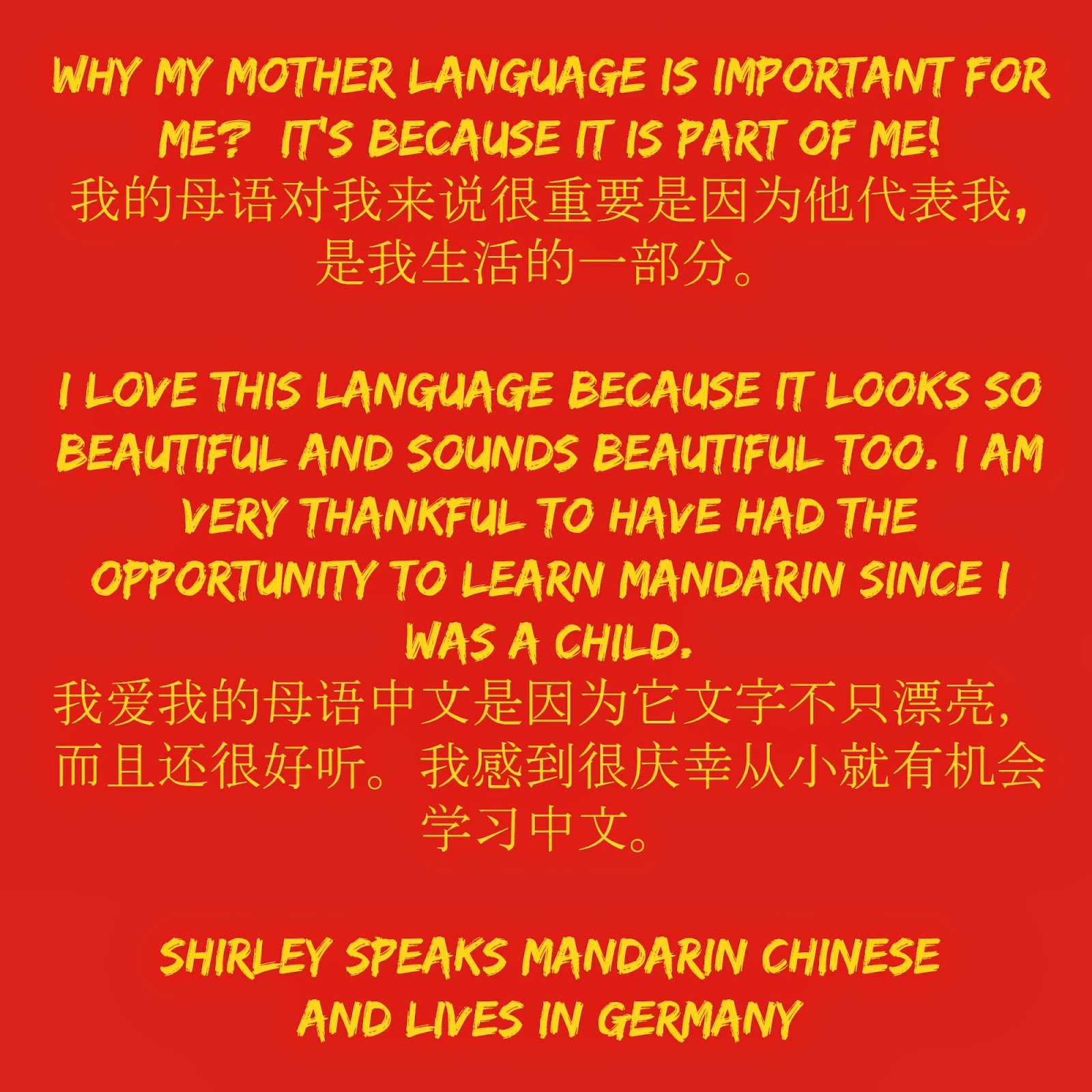 African languages, like I said earlier, are often learned at the same time as one of the European languages of the countries who colonised them in the 19th and 20th Century: Portuguese, French, English, Dutch, etc. Some are mostly oral languages and other can be written. But it doesn't mean many can write them. Education is rarely provided in these languages... It's why I love so much the programm of UNESCO. They try to help children to be scolarized in the main language and also in their local one (as much as possible).

My friend Jose is from Angola and lives in Germany. His mother tongues are Kiokue and Portuguese. He explained me that those are "his identity, his cultural instrument" and that writing african languages is sometimes quite difficult because of the phonetic. His use of Kiokue is essentially oral. Jose is also fluent in French and German, but don't start speaking English with him! You would make him loose his bright smile!


Ama is bilingual from birth in English and Twi. She lives in France (and had learned French). She can't write perfectly Twi, the alphabet is a bit complex, but told me she loves to use it orally at home with her children. Twi is for her a pictorial language, full of funny expression.

I will finish with Ute, who is a perfect bilingual since childhood in two european languages and is proof that those who say that learning several languages at the same time is "armful for the kids' brains" (one of the numerous myths about bilingualism...). She lives in the Netherland and blogs at expatsincebirth.com

Deutsch ist die Sprache meiner Familie, meiner Eltern und derer Vorfahren. Ich habe sie erst spät lieben gelernt, doch finde sie immer faszinierender und schätze den unermesslichen Wert des literarischen Erbgutes (German is the language of my family, of my parents and their ancestors. I learned to appreciate/love it quite late, but I find it more and more fascinating and I truly appreciate the immense value of the literary patrimony)

Deutsch ist wichting für mich, weil es meine Eltern und meine Kinder verbindet. (German is important for me because it connects my parents and my children)

L'italiano ha e avrà sempre un ruolo predominante nella mia vita perché è la lingua in cui riesco ad esprimere i miei pensieri più profondi e più accurati. Nonostante la situazione linguistica nella nostra famiglia sia cambiata rispetto all'inizio, considero l'italiano la lingua che più mi appartiene. Il fatto che la condivido con le persone a me più care la fa ancor più preziosa. (Italian is the most dominant language in my life because I can express my deepest and most accurate thoughts. Although the linguistic situation changed within our family (compared to the beginning), I consider Italian the language that pertains me the most. The fact that I share it with the most important people in my life makes it even more precious)


I wish you all a fantastic International Mother Language Day! And don't forget to share your love of your Mother tongue in the comments!


For more article about this event, search for the hashatg #IMLD!