Songs for past sport championships & olympics 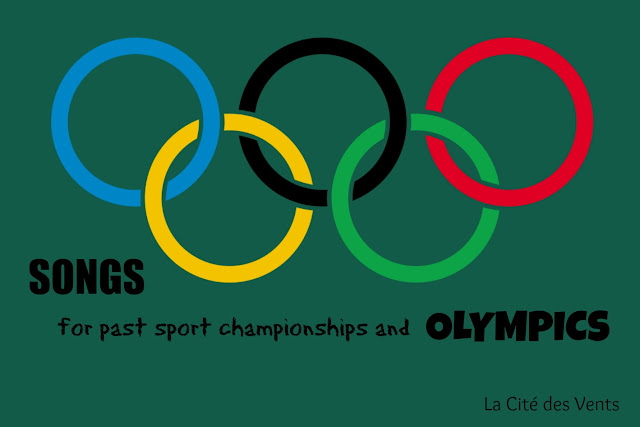 Many songs have been written for the opening or closing ceremonies of the Olympic Games. We will talk about some of them that have been and are still loved around the world.

This, this is the first song I really remember when someone talks about the Olympics. Not because I remember the opening ceremony with the big screen showing the recorded video of the two singers, just a few months after Freddie Mercury's death. It's just because I sung it with my middle school choir during several concerts. This song always gave me the chills and a "je ne sais quoi"... I will always have a special place in my heart for it.

This song talks about motivation and going beyond oneself... and it's not only in sports but also in life in general. In facts, it was written six years after Gloria's car crash in which she had her spine fractured. She succeeded in overcoming her pain and was able to walk again. That's a powerful song, isn't it?

If this video-clip doesn't represent the Olympic Games, I don't know what could! Whitney received an Emmy Award for it in 2008.

You will see in the clip that on the official korean TV, the opening ceremony was translated in Korean Sign Language. As the song talks about cooperation and frienship, this seems rather fitting!

The singer Tina Arena sung it with a children choir and it's one of the best remembered singing act of an Olympics ceremony.

I discovered this song while researching for this post and I totally felt in love with it! What a beautiful and powerful voice! The lyrics are not bad either...

Every football / soccer fan knows it: for each world cup or regional championship, songs are recorded and (heavily) passed on the radios. Here are 5 memorables, that could also aplied for Olympics athletes.

In France, it was the biggest hit with the song from Shakira (La la la) and the one from Germany (Auf Uns, from Andreas Bourani) during the 2014 Wordl Cup.


It's not a song, but I'm sure you are as fan as I am of this video sequence!

Welcome to our Olympics for Kids series! The Olympics are a wonderful opportunity to teach kids about the world and explore cultures together. Today, you can find more about other music posts about various countries thanks to our participating bloggers:

Don't forget that you can also download our Summer Games Unit activity pack to learn more about the world and have fun during the Olympics.